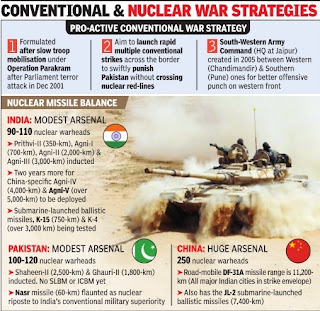 Honing its “proactive war strategy“ to swiftly mobilize and hit hard with multiple military strikes across the border, the Indian Army is conducting a massive exercise, codenamed “Shatrujeet“, in the Thar desert. Several armoured, artillery and infantry formations have been mobilized for the high-tempo operations conducted under a simulated nuclear, biological, chemical (NBC) warfare environment.
The exercise is being steered by the Mathura-based 1 Corps, one of the three principle `strike corps' of the 1.18 million strong Army , in conjunction with `offensive elements' of the `pivot corps' under the South Western Command headquartered at Jaipur.
“Pakistan might be foolish enough to talk about tactical nukes as weapons but India's no-first-use nuclear policy is clear. It warns of a massive and harsh retaliation to any first NBC strike by an adversary , be it tactical or strategic,“ said a defence source. Army chief General Dalbir Singh Suhag is slated to review the final phase of Shatrujeet later this month, which seeks to validate the force's capability to “first generate and then maintain“ intense offensive manoeuvres backed by long-range artillery and the Air Force. It will also include major airborne operations, including para-dropping 2,000-3,000 soldiers behind `enemy' lines.
Though Pakistan has the Shaheen and Ghauri series of long-range nuclear missiles, developed with covert help from China and North Korea, it often flaunts its 60-km Nasr (Hatf-IX) missiles with sub-kiloton plutonium warheads as a counter to India's military superiority . Islamabad makes no bones that it has developed its tactical nuclear weapons to deter any Indian conventional military thrust into its territory. But the Indian forces remain unfazed.