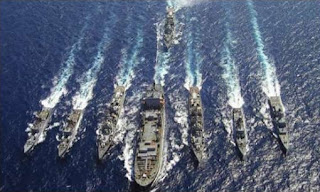 India is dispatching a flotilla of warships to the Persian Gulf to add military heft to its ongoing stepped-up diplomatic outreach to countries of the region while striking a fine balance between Sunni-led Arab states like Saudi Arabia, the UAE and Kuwait on one hand and the Shiite Iran on the other.
Guided-missile destroyer INS Delhi, stealth frigates INS Tarkash and INS Trikhand, missile frigate INS Ganga and tanker INS Deepak of the western naval fleet will leave Mumbai for Dubai (UAE) on May 3.After three days in Dubai, the warships will reach Kuwait around May 12 before heading for Manama (Bahrain) and Muscat (Oman) and then finally return to Mumbai by May 27-28. Around the same time, from May 20 to 23, another Indian warship will be at the famous Bandar Abbas port city on southern coast of Iran.
That's not all. While defence minister Manohar Parrikar is slated to visit Oman in May, IAF's Sukhoi-30MKI fighter jets and IL-78 mid-air refuelling aircraft will also touch down in the UAE for an exercise while returning from the Red Flag exercise at the Eielson airbase in Alaska (US) being held from April 28 to May 13.
With India's primary area of strategic interest stretching from the Persian Gulf to the Malacca Strait, the country's military establishment is cranking up ties with the Arab states as well as Iran.“The visits by our warships and aircraft to the Persian Gulf are aimed at enhancing defence relationships and inter-operability with the countries there as well as showing the Indian flag in this region of strategic importance,“ an official said. This military diplomacy is in tune with the political one to bolster economic and security bonds with a region that has around eight million Indian expatriates, apart from being a big trading partner and major source of energy, but has more than a few regional fault-lines..