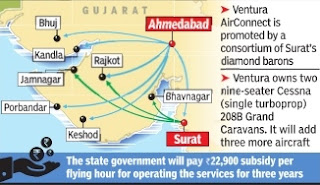 Ventura AirConnect, the air-charter company promoted by a consortium of Surat's diamond barons, has won the state government's tender to launch intra-state air connectivity in May .
The company , which had started Surat-Bhavnagar operations in 2015 but later suspended the service, will be handed the contract by chief minister Anandiben Patel at the air show in Ahmedabad on Friday.. “Ventura will connect Surat to Rajkot, Jamnagar and Bhavnagar and Ahmedabad with Surat, Bhuj, Kandla, Porbandar and Keshod,“ said Kartikey Garasia, CEO, Ventura AirConnect. Ventura presently owns two nine-seater Cessna (single turboprop) 208B Grand Caravans. “We plan to add three more aircraft. We have placed the order for Diamond 42 aircraft, which is expected to arrive from the US soon,“ Garasia said.
As per the contract, the state government will pay Rs.22,900 subsidy per flying hour for operating the services for three years. The average monthly subsidy will be for 200 hours. “We will be able to claim VAT relief on the subsidy amount payable by the government for 200 hours per month,“ said Garasia. The company is confident of clocking more than 400 flying hours a month.“Earlier, we had clocked over 287 flying hours in a month in the Surat-Bhavnagar and Surat-Rajkot services. We are focussing on Surat-Bhavnagar and Surat-Rajkot routes as development works are going on at other airports,“ he added.
This is the second attempt b the state government to connect various cities of Gujarat with flights. Last January, Maritime Energy Heli Air Services Ltd (MehAir) had launched the first-ever intra-state service with Gujarat State Aviation Infrastructure Co. Ltd (GUJSAIL) from Ahmedabad. However, it stopped the operations within just three months after failing to attract passengers. State civil aviation minister Saurabh Patel said, “Ventura AirConnect has proven record of operating between Surat and Bhavnagar.“ 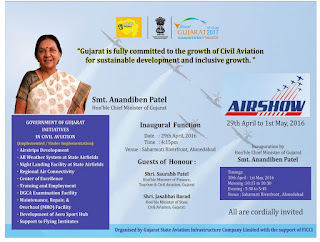