No takers for Dharavi redevelopment 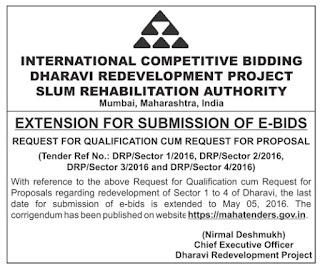 Maharashtra state government's ambitious Rs.22,000 crore Dharavi redevelopment project has not received a single bid. The Dharavi Redevelopment Authority (DRA) had invited global tenders and April 20 was the last date for submission of bids. “At 1 pm, the deadline for submission, we had not received a single bid. We have now extended the deadline by two weeks to May 5,“ said DRA chief executive officer Nirmal Deshmukh. In March, when the authority had called a pre-bid meeting to apprise probable builders of the public-private participation model through which the slum was to be redeveloped, 16 companies had attended the meeting.
This is the government's second attempt to redevelop Dharavi. The Congress-led Democratic Front government had in 2007 invited expressions of interest and had received 14 responses, of which seven later backed out. The other bids were found faulty and the project was cancelled in 2011.
Spread over 557 acres, Dharavi had been divided into five sectors for ease of redevelopment. Sector five was being redeveloped by the Maharashtra Housing Area Development Authority (Mhada). Global tenders had been invited for the other four sectors.
Mhada has been unable to fast-track redevelopment in sector 5. “The authority took up redevelopment in 2011 but only constructed a building on a vacant plot.The building was ready a year ago but no shifting has been done so far,“ said officials.
The slum houses 60,000 families and the project was aimed at providing them 350 sq ft tenements free of cost, besides adding 8,000 tenements for project-affected persons or affordable housing. It had also intended to create 40,000-50,000 tenements as a free sale component.