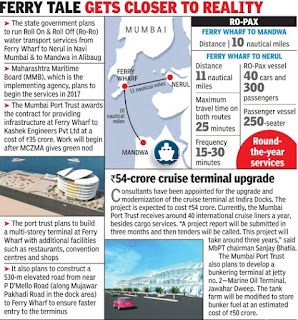 In a significant move to reduce the burden of over 10,000 Goa and Konkan-bound vehicles on  Mumbai roads, the Mumbai Port Trust (MbPT) has awarded the work order for the Ro-Ro (Roll On & Roll Off) water transport services terminal at Ferry Wharf, even as similar development is underway at Mandwa in Alibaug by the Maharashtra Maritime Board (MMB). Ro-Ro service vessels can carry vehicles as well as passengers from one end to another.
“One Ro-Ro service will be able to carry over 300 passenger cars or about 100 trucks. It will not only help save almost one hour of travel time as well as fuel, but also cut vehicular pollution,“ said MbPT chairman Sanjay Bhatia. His deputy , Yashodhan Wanage, said that if all goes according to plan, the terminal should be ready in two-and-a-half years when Ro-Ro vessel services are expected to begin.
According to senior Mantralaya officials, the fare per car or SUV would be Rs 400-Rs 500 and for trucks, Rs 700-Rs 800.
The MbPT has also decided to issue tenders for a Rs 54-crore project to upgrade and modernize the cruise terminal at Indira Docks, which currently handles both cruise liners and cargo ships. The port trust has appointed Planet 3 as the consultant to prepare the technical report, including the architectural design.
The Ferry Wharf terminal work order has been awarded to Karagwal Construction Pvt Ltd, which is likely to get an investment worth Rs.35 crore. “Ro-Ro services will save a detour from Pen, Panvel Road, a 110 km distance; they will take just 20 minutes to ferry vehicles from one end to another.And, if the 30 minutes required for embarking and disembarking on both sides is included, motorists will save around one hour travel time,“ said a source.
The Mumbai port receives around 6,000 international ships every year, barges luxury yachts and ferry services. Currently , catamarans and hovercrafts are used to transport only passengers between two destinations. “Once vehicles start using Ro-Ro services, there will be more road space on the eastern corridor.Eventually , when the Cidco terminal towards Nerul comes up, most of the traffic will be diverted via Ro-Ro vessels and catamarans,“ the source said.
“The letter of intent has been issued to Karagwal Construction to create marineside facilities infrastructure for taking vehicles on the Ro-Ro vessel. The Maharashtra Maritime Board will appoint the operator for the Mandwa infrastructure.Once both terminals are ready, the Ro-Ro vessel and catamaran operators will be appointed,“ said a Mantralaya official said.
Including MbPT, Cidco and MMB terminal facilities, the project is expected to cost Rs.1,000 to Rs 1,200 crore with each agency spending around Rs 400 crore.
Approximately 1.8 crore people use water transport annually across the state.The Maharashtra State Road Development Corporation was initially entrusted with executing Ro-Ro services project, but it was later handed over to MMB.