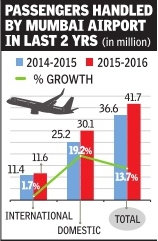 Sometime early this year, the Mumbai airport quietly crossed a milestone when it handled over 40 million passengers to enter the league of big airports of the world. The nearly 14% growth in passenger traffic into and out of Mumbai recorded this fiscal though brings along a key concern. Phase 1 of the Navi Mumbai airport won't be ready before 2019, and the current airport terminal buildings won't be able to keep up with the appetite for air travel. With demand outstripping supply, it is the passengers who may have to bear the brunt of increased fares.
In the fiscal year 2015-16, Mumbai airport handled a total of 41.67 million passengers, compared to the 36.6 million passengers it handled in 2014-2015. Forty million is a milestone as industry bodies like Airports Council International segregate airports into different sizes, starting from 2 million to over 40 million. Mumbai airport has entered the big league, handling nearly 42 million passengers in 2015-16. Aviation industry bodies classify airports ranging from those which handle 2-5 million annual passengers to the last category , which is all airports that handle “over 40 million passengers“, that is, the big league. Till now, Mumbai airport was in the “25-40 million“ category and competed for awards and honours in this group.
With its entry into the over 40 million category , it's now in the league of the main airports of cities like Dubai, London, Beijing, New York etc. But unlike any of the airports of any of these cities, the plans afoot to cater to air traffic growth out of and into Mumbai hardly match the big league.
Till a few years ago, the plan was to have Phase 1of Navi Mumbai airport completed by 2015 so that its passenger handling capacity of 15 million along with Mumbai airport's integrated Terminal 2's passenger handling capacity of 40 million would have been enough to meet the growing demand for flights. However, Mumbai airport's T2 and domestic terminals together now handle more than 40 million passengers. The new deadline for completion of Phase 1 of Navi Mumbai is December 2019. The next four years then would be crucial for Mumbai.
An airport's capacity is largely determined by the number of passengers its terminals can handle and the number of flights its runways can take.Mumbai's main runway already operates to its full capacity during peak hours.
As for the terminal buildings, currently , all flights, except those operated by IndiGo, Spice Jet and Go Air are handled by Mumbai T2. The three low-cost airlines operate out of domestic terminals in Vile Parle, but they will eventually be moved to T2 in the coming months under a phase-wise transfer plan. “These three airlines have a combined market share of about 57%. While the passenger handling capacity of T2 building is being augmented, there is only so much extra load it can take,“ the official said, adding that delay in construction of the Navi Mumbai airport has been forcing certain change of plans at the Mumbai airport.
The Hartsfield Jackson-Atlanta airport, the biggest in the world in terms of passenger traffic, handled 101 million passengers in 2015. Dubai airport handled 78 million passengers.While India is not up there, reports suggest its aviation industry will show high growth in the coming decade. 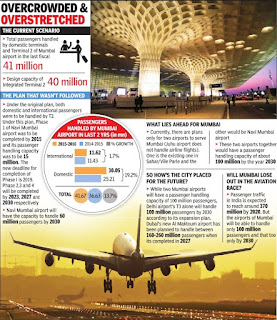