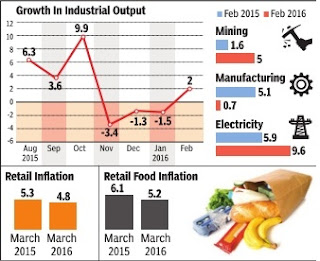 There was all-round cheer for the economy as industrial output growth rebounded in February, retail inflation eased in March triggering hopes of an interest rate cut and the weather office predicted above average-monsoon rains.
Data released by the Central Statistics Office (CSO) showed the index of industrial production rose an annual 2% in February after three months of contraction, led by robust electricity and mining sectors and growing strength in consumer durables.
Separate data released by the CSO showed retail inflation rose an annual 4.8% in March, slower than 5.3% in February , on the back of moderation in food prices.
The two sets of data came on a day when the weather office predicted above-average monsoon in the July-September period, bringing relief for policy makers, who are struggling to ease the pain of the farm sector, which had faced two successive years of patchy monsoon rains. The expected revival in rural demand augurs well for overall economic growth and for easing price pressures particularly food inflation.
Economists expect retail inflation to be around 5% in the current fiscal and within the central bank's comfort zone.