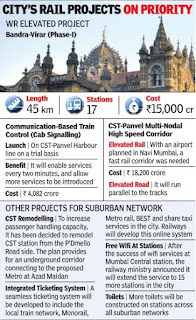 Three delayed projects, which promise to ease commuting on the city's suburban network, received a major boost after the railway ministry and the state government addressed the roadblocks to enable work on them to begin by August 2016. These include an elevated rail corridor between Bandra and Virar, a road and rail corridor between CST and Panvel and cab signalling system on the Harbour line.
The decision was taken at a meeting between railway minister Suresh Prabhu and chief minister Devendra Fadnavis on Thursday . Moreover, to expedite other projects across Maharashtra, the railway ministry and the state government are close to setting up an SPV , called the `Maharashtra Railway Infrastructure Development Company'.Work can begin once the company is registered, said Prab hu. The SPV will complete nine projects across the state worth Rs.23,000 crore, which Fadnavis said have been pending for years.
Bottlenecks in the crucial projects--CST-Panvel elevated corridor, Bandra-Virar elevated corridor and cab signalling system--were also addressed and it has been decided to execute them on a cost-sharing basis. Prabhu said a remodelling of CST station will also be undertaken to increase passenger handling capacity .The project includes an underground corridor which will be connected to the proposed Metro at Azad Maidan. This will also boost CST-Churchgate connectivity , said Prabhu. Besides, 33 stations across the state will be upgraded vertically so that malls and food courts can be constructed on top of the station buildings.
Mumbai Railway Vikas Corporation chairman and managing director Prabhat Sahai said, “While the WR elevated corridor will be executed on the public-private-partnership model, work on CST-Panvel elevated corridor will be carried out on cash contract basis.Cab signalling will be included in Mumbai Urban Transport Project-III.“
A CR official said, “The introduction of cab signalling will help us run more services on Harbour line as the frequency achieved per train will be two minutes compared to existing four minutes.“ Sahai said the detailed project report of the WR elevated line and CST-Panvel hi-speed line will have to be updated. MMRDA has kept on hold its plan to extend the Eastern Freeway , paving the way to build the elevated CST-Panvel road via P D'mello Road, he added.
The WR elevated rail project was stalled in 2013 after the state government asked the railway ministry to run the corridor only between Bandra-Virar instead of extending it to Churchgate. It felt that the proposed Metro-III corridor (Colaba-Bandra-Seepz) will cater to commuters in South Mumbai. 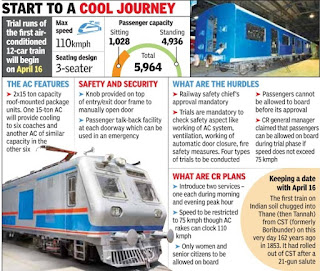 Dynamic trials of the first air-conditioned rake on Mumbai's suburban system will be held from May 15, said railway minister Suresh Prabhu. Static trials were on and dynamic trials will be conducted for three months.