Of Municipal Bodies meeting their own expenses.... 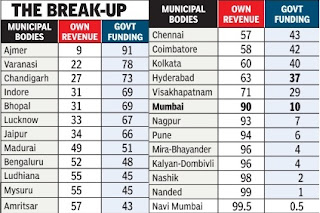 When it comes to meeting their financial needs, municipal corporations in Maharashtra stand apart from their counterparts from other states, with Gujarat coming close. In Maharashtra, municipal corporations are able to meet more than 90% of their expenses from revenue they generate on their own, compared to most civic bodies in the country that depend on funds from the Centre, state or bank loans to meet over 50% of their expenses, mainly because of poor revenue collection and weak self-financing capacity .
Cities such as Bengaluru, Kolkata, Hyderabad, Chennai, Thiruvananthapuram, Bhopal and Jaipur show a very high dependency on `transfer funds' in the absence of a strong treasury of their own. Cities in Madhya Pradesh and southern states of Kerala, Tamil Nadu and Karnataka fair a little better.
A review of fiscal health taken by experts on urbanization ahead of the BRICS city conclave beginning in Mumbai from Thursday suggested that none of the 41 leading corporations were fully dependent on their own revenue, leave alone making profits, unlike cities abroad where local bodies are capable of granting loans.The conclave will see hundreds of experts from across the world deliberating on civic issues to formulate a strategy for cooperation in sectors of urbanization among BRICS nations.
The compilation `The making of vibrant cities' published by Mumbai First, an NGO instrumental in holding the evening, said Mumbai, Navi Mumbai, Nagpur, Kalyan-Dombivili, Nashik, Pune and Nanded show a very minimum 0.5% to maximum 10% dependency on funds from other the state, banks or Centre. In Ahmedabad, Rajkot and Vadodara, up to 90% revenue is being generated at local level.
It may be mentioned that between 2007 and 2013, the own tax revenues of municipal bodies have declined by nearly 5%. The central funding to the cities has also declined during the period except for the finance commission funding, which has gone up marginally .Experts suggest that the bodies should now go for public private partnership models of development to expedite the quality of growth in their cities. 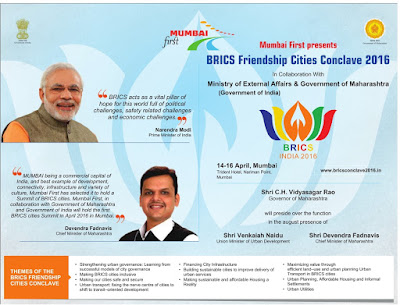