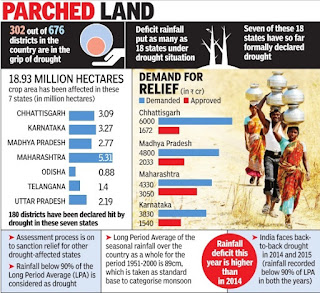 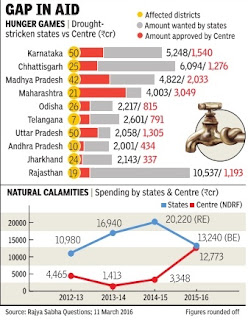 The Supreme Court rejected the Narendra Modi government's stand that states were responsible for dealing with drought in their territories and that its role was restricted to granting funds. The Centre's responsibility doesn't end with providing funds, the court said, adding that it was duty-bound to get the states to act, even as the government said the drought has so far affected 33 crore people -about a quarter of the country's population.
The government has sanctioned funds to guarantee minimum 100 days of work in drought-hit areas and activated statutory scheme to ensure food security and crop loss compensation, Additional Solicitor General PS Narasimha told the court. Banks will reschedule loans in the affected areas, provided the debtor had not defaulted on any of his payments, he said.
But the government's lawyer said it was the state's responsibility to declare drought on the basis of indices such as a shortfall in rainfall, area under crop sowing, vegetation and moisture content. Mitigating measures such as ensuring employment for the drought-affected and adequate food security are also the state's responsibility , he argued.
The bench of Justices Madan B Lokur and NV Ramana, hearing a petition filed by Yogendra Yadav's NGO Swaraj Abhigyan, didn't agree with the stand that the Centre had fulfilled its obligations. It's not just about money , the court said. “The central government has technology (such as satellite imagery) at its disposal. Can you not say on the basis of that information that you (any state) are headed for trouble,“ the bench said. “You are also under a duty to say that everything is not alright, please take remedial measures. If the state does not do so, you have recourse to other sections of the Constitution.“
The ASG said 254 districts were affected by the current spell of drought.The data he had didn't include Gujarat, but all other drought-hit states: Bihar, Haryana, Maharashtra, Karnataka, Madhya Pradesh, Rajasthan, Uttar Pradesh, Telangana, Andhra Pradesh, Odisha, Chhattisgarh and Jharkhand.
The court stressed on the need to start early in dealing with drought, saying the process should begin soon after the monsoon if the rains were less. “Mitigating efforts must start in July-August. No point if it done after,“ Justice Lokur observed. “Gujarat declared drought only two weeks ago.You must have had information that things were not fine,“ the judge said.
He had some harsh words for the Gujarat government, which the NGO lawyer, Prashant Bhushan, charged had misled the court along with Bihar and Haryana on the actual drought situation in their territories.“Don't think you can take things lightly because you are Gujarat,“ Justice Lokur said. “Don't think you can get away by doing anything just because you are Gujarat,“ he said.
“May be you don't want us to see the information.“ The bench said, as it had not received affidavits from the state government on the data on rainfall and other indices which would reveal the extent of drought in the state.