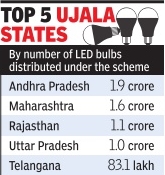 India is poised to emerge as the largest market for lighting systems based on LEDs (light-emitting diodes), thanks to the Narendra Modi-led government's UJALA (Unnat Jyoti by Affordable LEDs for All) scheme for replacing all inefficient bulbs with these energy-efficient lamps. “With India selling 770 million LED bulbs every day , the country will soon become the LED capital of the world. Prices of LED bulbs have come down to 55 pence (Rs.52) from over 3.5 pounds (Rs.332) two years ago,“ a government statement quoted power minister Piyush Goyal as telling investors in London on Wednesday .
Today , 12% of all LED lighting systems sold in the world is consumed in India, according to Saurabh Kumar, managing director of Energy Efficiency Services. The company , promoted by state-run power utilities, is the nodal agency for implementing the UJALA scheme.
UJALA has brought down the price of an LED bulb to Rs 85 for a 9-watt on an average.