The government will integrate 21 regulated wholesale markets, or mandis, in eight states under an online platform on Thursday as part of the proposed National Agriculture Market (NAM). “On April 14, on the 125 birth anniversary of BR Ambedkar, Prime Minister Narendra Modi will launch the e-trading platform -NAM -which proposes to integrate 585 regulated wholesale market or agriculture produce market committees (APMCs) under one electronic platform,“ said agriculture minister Radha Mohan Singh. This will ensure farmers get competitive returns and consumers get stable prices and steady availability, he said.
NAM is envisaged as a pan-India electronic trading portal that seeks to network the existing Agriculture Produce Marketing Committee (APMC) and other market yards to create a unified national market for farm commodities. “The national e-market platform will allow transparent sale transaction and price discovery of commodities,“ Singh said.
Currently, there are more than 7,000 wholesale markets in the country. States selected for the pilot project include Gujarat, Telangana, Rajasthan, Madhya Pradesh, Uttar Pradesh, Haryana, Jharkhand and Himachal Pradesh. “Initially 12 commodities, including chana (black gram), castor seed, paddy, wheat, maize, turmeric, onion, mustard, mahua flower, tamarind and shelling pea, will be traded on e-platform and not in the physical market,“ Singh said.
Government officials said while sale of agri produce shall continue through mandis, an online market would reduce transaction cost, provide single license valid across all markets, and maintain quality standard with provision of quality testing and single point levy of market fees.
The agriculture minister also said that food grain production in the country in 2016-17 will be better than the previous year. In 2015-16 (July-June), food grain production is expected to be 253.2 million tonnes from 252 million tonnes in the previous year, which was also a deficit monsoon year.
A bumper production will keep a check on inflation, ensure steady supplies of commodities and remunerative price to farmers.
Asked if he expected food grain production to touch the 2013 record of 263 million tonnes, Singh said, “that was a record food production the country had and we will make a comparison of production with the previous year.“ 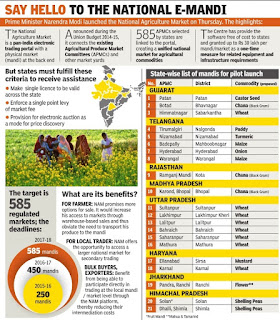