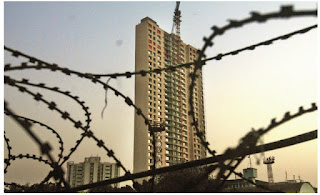 The Bombay High Court ordered demolition of the 31-storey Adarsh Co-operative Housing Society, and sought criminal proceedings against politicians and bureaucrats for “misuse“ of power, holding that the Cuffe Parade tower was illegally constructed. Termed as the `tower of deceit', the Adarsh society scam had led to the resignation of Congress' Ashok Chavan as the state's chief minister in November 2010. The high court ruled on Friday that the cost of demolition be recovered from the society, but stayed its order for 12 weeks to allow the society members to file an appeal in the Supreme Court.
A division bench of Justices Ranjit More and Rajesh Ketkar also asked the state government to consider initiating civil and criminal proceedings against the bureaucrats and politicians involved in the project, and ordered departmental inquiries against the government officials connected with the society. The society, originally meant to be a six-storey structure to house Kargil War heroes and war widows, was converted into a 100-metre-tall building with politicians, bureaucrats and army officers allegedly conspiring to get flats at below market rates.
After the scam came to light, the occupation certificate granted to the society was revoked in 2010, and the Central Bureau of Investigation (CBI) took over the probe. The building still remains unoccupied and without electricity and water supply.
Ashok Chavan, retired army officers Major Generals TK Kaul and AR Kumar, Brigadiers Madan Mohan Wanchoo and TK Sinha, and Colonel P K Bakshi, former MLC Kanhaiyalal Gidwani, IAS officers Jairaj Phatak, Ramanand Tiwari and Subhash Lalla, Adarsh Society secretary RC Thakur, former deputy secretary of State Urban Development Department PV Deshmukh, and former collec tor Pradeep Vyas have been named as accused in the case.
The court, in its 221 page order, praised activist Simprit Singh, associated with the National Alliance for People's Movement,­ calling him an “unsung hero“. The order observed that the scam was unearthed due to his efforts but because he was not a party to the litigations in the high court, he was never heard and didn't get an opportunity to appear before the court in these proceedings. The Adarsh Society secretary, RC Thakur, said that the building plan was sanctioned by the MMRDA. “We have respect for the judiciary and will approach the Supreme Court,“ he said.