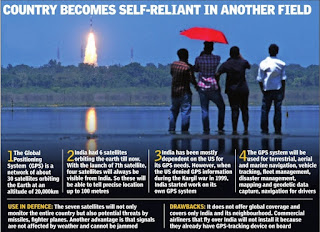 India has joined an elite group of countries, including the US and Russia, to have their own satellite navigation system. Indian Space Research Organsation (Isro) successfully launched the PSLV-C33 delivering its payload, IRNSS-1G, the seventh and last in a constellation of satellites that make up the indigenous GPS system.
An XL version of a Polar Satellite Launch Vehicle (PSLVC33) placed the satellite in orbit around 20.19 minutes after lift off from Satish Dhawan Space Centre in Sriharikota at 12.50 pm. Congratulating scientists on the successful launch, Prime Minister Narendra Modi said the new technology will not only help India but can also help the Saarc nations.
“The new technology will benefit our people, our fishermen,“ he said. “The world will know it as Navic.“ he said. The EU and China, along with US and Russia, have indigenous satellite navigation systems.
IRNSS mission director B Jayakumar said the complete network of seven satellites will be fully functional within two months. “The first six satellites in the orbit have already started functioning from their designated orbits,“ he said.
When the entire network becomes fully operational, it can provide navigation and positioning services to users via their smartphones and devices in vehicles with an expected positional accuracy of 20 metres. It can also provide the service in areas that require high-precision for marine navigation, rail transport, aviation and military applications with an accuracy of 10 m.
But for the positioning service to reach the common man on a handheld device may take some time as it will require Isro's installation of additional hardware. An Isro official said the space agency had developed a coded chipset that can be incorporated with an existing receiver of a smartphone or any positioning device on vehicles, ships or planes to communicate with the satellite and get position information. “But entrepreneurs have to step up and make these chipsets on a large scale,“ he said.
Isro has also been conducting meetings with navigation device manufacturers and mobile phone manufacturers to demonstrate how IRNSS could provide accurate information on par with US's GPS, which is the most widely-used system in the world. Compared to the US GPS, which has a precision of 5 m and global coverage, IRNSS covers a 1,500 km radius with India at the centre. However, it will reduce India's dependence on the US and Russia's GLONASS particularly during emergencies, including military situations. The IRNSS project was envisioned after the US denied GPS information during the Kargil war.