Court Frames Charges Against Advani, Others 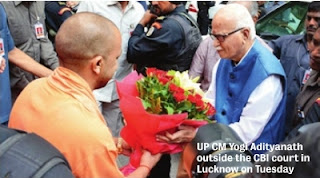 Senior BJP leaders L K Advani, M M Joshi and Uma Bharti were charged with criminal conspiracy in the 1992 Babri mosque demolition case by a special CBI court. The court, which earlier rejected their discharge petition, framed charges against Advani, Joshi, Union minister Bharti and three others under Section 120 (B) of the IPC (criminal conspiracy).

The three others are the BJP's Vinay Katiyar, VHP's Vishnu Hari Dalmiya and one-time Hindutva firebrand Sadhvi Rithambara. The accused had argued against the framing of charges against them, asserting that they had no role in the razing of the mosque and had tried to stop it. Their discharge petitions were rejected by the judge.

The court is hearing two separate cases relating to the demolition of the 16th-century mosque.

Six others accused in the second case -Ramvilas Vedanti, Baikunth Lal Sharma, Champat Rai Bansal, Mahant Nritya Gopaldas, Dharam Das and Satish Pradhan -were also charged with conspiracy and offences such as promoting enmity between different groups on grounds of religion, race, etc, and defiling a place of worship with the intent to insult a religion.