Mumbai: World's busiest airport with only one runway 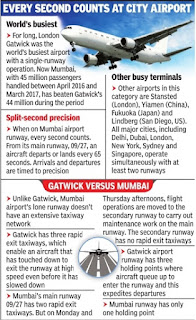 A few weeks ago, Mumbai airport quietly overtook London's Gatwick to become the world's busiest airport that operates with a single runway. For the airport operator and Mumbai air traffic control, it's an achievement. They now handle one of the most difficult jobs in the world, as every 65 seconds an aircraft either takes off from or touches down at the Mumbai airport.

For the government, though, it would be a matter of shame as no other major city in the world is serviced by a lone airport that has a single operational runway . The main airports of most major cities such as Delhi, Dubai, Singapore, Sydney , London and New York handle aircraft with at least two parallel runways in use.

All passenger and cargo aircraft operate from a single runway: either the main runway (0927) or, when it's shut for repairs, the secondary one (1432).

In the financial year ending March 2017, Mumbai airport handled 45.2 million passengers, beating Gatwick's 44 million. “Currently , Mumbai airport handles 837 arrivals or take-offs in a day -an average of 80 flights more than Gatwick, which handles 757 movements in a day,“ said an airport official. A senior air traffic controller, said, “We po sition two arrivals every 130 seconds and one departure in between these two arrivals.So there is one take-off or touch-down every 65 seconds from the main runway of Mumbai airport.“

Though Mumbai airport has two cross runways, only one is in use at any given time, making Mumbai an accidental entrant into the group of airports around the world that operate with a lone runway. It's not an unjust inclusion, as other airports in the single runway league, like Gatwick, for instance, have similar arrangements. Gatwick has two parallel runways but uses only one at a time. “Because of land constraints, Mumbai airport cannot have a parallel runway and simultaneous use of its cross runways is too complicated, which leaves the lone runway to handle all air traffic,“ said the air traffic controller.

Mumbai International Airport Pvt Ltd, the company that runs the airport, has been working at improving the taxiway network of the airport. The less time an aircraft spends on the runway to take off or land, more the number of flights it can handle.

“Currently, work on extension of an existing taxiway is on to connect the Terminal 2 aircraft parking apron to runway 27. It will provide the much-required additional holding area for aircraft ready to take off on the main runway 27,“ said an MIAL spokesperson.