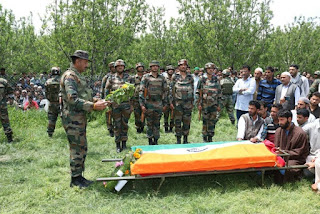 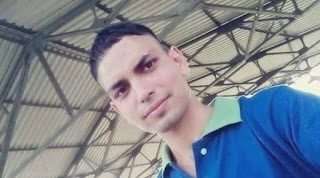 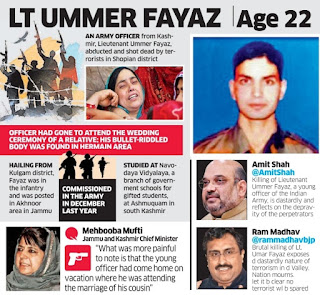 A young Army officer from Kashmir, on leave to attend a family wedding, was abducted and brutally shot dead by three to four terrorists in Shopian district of south Kashmir late on Tuesday, triggering widespread outrage in strife torn Jammu - Kashmir, and across the country.

An unarmed Lieutenant Ummer Fayaz, commissioned into the Rajputana Rifles barely five months ago, was at his maternal uncle Mohammad Maqbool's house at Batopora when the terrorists barged into the marriage ceremony and dragged him away around 10 pm.

Police said the terrorists took the officer, who would have turned 23 on June 8, around 4 km from the venue of his cousin Shafiqa Akhtar's marriage ceremony before mercilessly pumping several bullets into him. The bullet-ridden body of Lt Fayaz, who belonged to Sudsuna village in Kulgam district, was found on Wednesday morning. “He was shot several times in the face and abdomen,“ said a doctor at the Shopian district hospital. There were injury marks on the body, indicating that the officer had put up stiff resistance against his abductors. The Army vowed to act against the perpetrators. Lt Fayaz's funeral was marked by full military honours.

Though militants have been regularly targeting Kashmiris serving in J-K police and other government jobs, this is the first time since the early 1990s that an Army officer on leave has been killed in the terrorism-hit state.

“It's a clear message by Pakistan-sponsored terrorists to intimidate Kashmiri youths into not joining police or security forces, as part of the larger game plan to shatter the social fabric,“ said a senior Army officer. The horrific crime seems intended to deter the large number of local youths who turn up at police and Army recruitment camps despite protests against the government. Intelligence reports said Hizbul Mujahideen terrorists were involved in the killing of Lt Fayaz, who was posted with his battalion in Akhnoor in Jammu, after tracking him for some time. Describing the killing as “a dastardly act of cowardice“, defence minister Arun Jaitley said, “This young officer from J-K was a role model. He was an exceptional sportsman. His sacrifice reiterates the nation's commitment to eliminate terrorism from the Valley.“

J&K chief minister Mehbooba Mufti in turn, added, “What was more painful to note is that the young officer had come home on vacation where he was attending the marriage of his cousin.“

For once, political parties in J-K dropped criticism of each other and joined hands in condemning the brutal murder of Kashmiri officer, Lt Ummer Fayaz, by terrorists. While CM Mehbooba Mufti said the killing was particularly painful because the officer was home on vacation, National Conference described the killing as barbaric. “This is barbaric and unacceptable and should be condemned unequivocally. Our heart goes out to the family of Lt Ummer Fayaz. The government should probe the circumstances that led to this tragic killing,“ an NC spokesman said. Former CM Omar Abdullah tweeted his condolences to the family. Deputy CM Nirmal Singh conveyed his sympathies to the family.