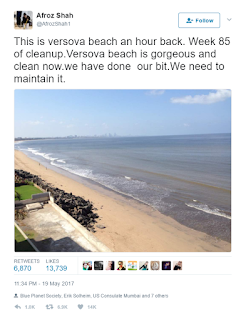 Lawyer and activist Afroz Shah tweeted a photograph of the Versova beach front. It was captioned: “This is Versova beach an hour back. Week 85 of cleanup. Versova beach is gorgeous and clean now. We have done our bit. We need to maintain it.“ That the photograph instantly drew the attention of the Twitteratti is only a tiny testament to his awe-inspiring efforts.

Shah has made headlines for being responsible for ridding the 2.7 km stretch of Versova beach off 5 million kg of waste over 85 weeks.“That the garbage accumulated belonged to 10 million people residing between Andheri and Borivali is why it took as long to clean up,“ says Shah. When the high court counselor moved to Versova two years ago, he was appalled by the heaps of refuse at the beach. “Almost 5-and-a-half feet of plastic waste was accumulated by the jetty, it was devastating,“ remembers Shah. His professional instinct urged him to file a PIL or a complaint against the BMC ward responsible for its upkeep. “But I chose to do it the hard way,“ says the 33-year-old, who decided to task himself with cleaning the beach, and looked around for like minded people.

The first volunteer happened to be an 84-year-old cancer patient, late Harbansh Mathur. From a core team of six, the cleanup team grew to 30 (today, it has some 200 people).

Shah says keeping the beach clean has to be a collaborative job. “We like to blame the BMC for everything but forget that protecting the environment is our constitutional duty,“ says Shah, who was initially dissuaded by many for “doing BMC's work“.

Shah first reached out to BMC officials in January 2016. “I told them that I was cleaning the beach and they could come and help,“ says Shah, who approached the task systematically and even prepared a tide chart. Today Shah's clean-up extends to the toilets located near the slums of Sagar Kutir, towards the southern end of the beach. He feels that doing so would prevent open defecation at the beach. Shah's approach was appreciated by the then assistant BMC commissioner P R Masurkar. “He said it was first time a citizen had approached the outfit with a proposal to collaborate and not just with a complaint.“

Word of Shah's work reached the United Nations, and Lewis Pugh, the UN Patron of Oceans, flew down from South Africa to pick up the shovel and joined Shah in his efforts. Shah was also honoured by the UN with the Champion on Earth award. On June 5 -World Environment Day -Shah is being roped in by the UN to speak on the importance of preserving the environment. But he feels it's “not a matter to be discussed in board rooms“.

That the refuse discarded at the beach comprised mostly single-use or derivative plastic, mainly plastic bags and milk pouches, prompted Shah to seek assistance from those manufacturing the same. Shah received a tractor and 10 cleaners from the All India Plastic Manufacturer's Association in April this year.

Shah believes that it will be challenging to maintain the beach's present litter-free avatar. So, awareness drives and opening communication channels at the grassroots level are part of his masterplan. “I've shared my plan with local fishermen and have also planted 50 coconut trees. I want to use this as a model to work on all the beaches in the city.“ 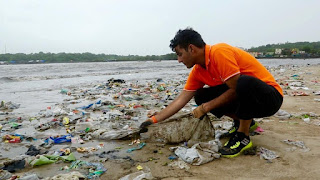 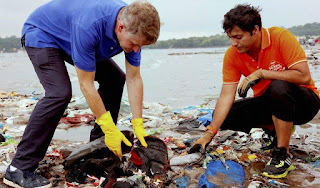 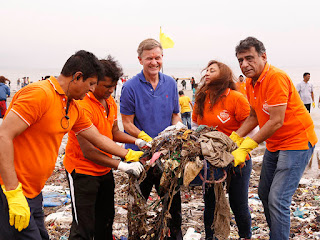