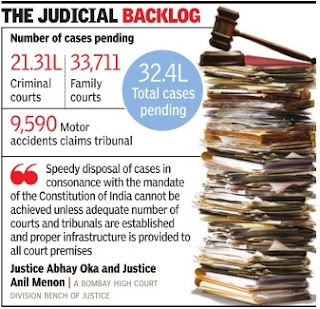 With over 32 lakh cases pending in courts across Maharashtra, the Bombay high court has ruled that it is the state's constitutional obligation to provide adequate number of courts, judges, infrastructure and staff to ensure speedy disposal of petitions. “Speedy disposal of cases in consonance with the mandate of the Constitution of India cannot be achieved unless adequate number of courts and tribunals are established and proper infrastructure is provided to all court premises,“ said a division bench of Justice Abhay Oka and Justice Anil Menon. “Financial constraints is no ground to deny permissions for establishing new courts and denying essential infrastructure to all the courts, whether existing or new,“ the bench said, adding that it was the state's obligation to allot land to build new courts. The HC's orders came on a bunch of petitions filed by bar associations and consumer rights organisations about the state's failure to provide infrastructure in courts and fill judicial vacancies.

The court pointed out to the figures of the National Judicial Data Grid which said that there were around 32.39 lakh cases pending in the civil and criminal courts, co-operative courts, labour courts and industrial courts in the state. It underlined the importance of providing adequate number of judges, filling up vacancies and infrastructure for courts. At present, in Maharashtra, there are around 407 court complexes, including 72 that are operating out of rented properties.

The bench has directed the state to set up an e-court project in the state and district consumer forums. “The state government shall start the process of digitization records of the state commission and the district fora, and to provide facility of e-filing,“ the judges said.

Emphasising that court premises should be clean, the HC has asked the state to make available clean and safe drinking water at each court as well as maintain a high standard of cleanliness and hygiene in all the court complexes. The HC also directed the state to provide round-the-clock security in the form of police protection to all the court complexes and residential quarters of the judicial officers. The HC has also ordered structural audit and fire safety audit of all court buildings at regular intervals. In an important directive, the bench has also asked that all court buildings, including court rooms, should be made disabled friendly. The bench has scheduled the matter for hearing on August 11 to check the compliance of its orders.