Cyclone Mora to graze past Kolkata 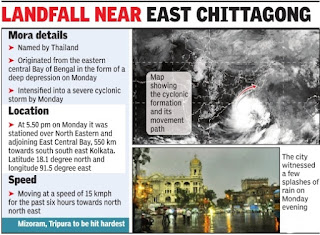 Tropical cyclone Mora is all set to hit Bangladesh by a little before noon on Tuesday, grazing past Kolkata. Though the cyclone will not hit Kolkata directly, it will leave its impact in the city and other coastal areas in the form of rain. Squally wind with a speed of around 50 kmph will also hit the coastal areas. Met office expects moderate rain on both Tuesday and Wednesday .

Named by Thailand, Mora will make its landfall near East Chittagong a little before 12 noon on Tuesday, some 280 km from Kolkata. Originated as a deep depression over the eastern central Bay of Bengal on Sunday, the system had intensified into a cyclonic storm by Monday .

Fortunately, Mora is unlikely to leave any trail of devastation in Bengal, except for heavy rain in some coastal areas. The worst hit will be the north eastern region of India, particularly Mizoram and Tripura where the impact will be the greatest. After making its landfall, Mora will turn into a deep depression causing heavy to very heavy rainfall in the North East.

As the cyclone inches closer to Kolkata, it will cause wide spread moderate rain in the coastal areas. The sea condition will be rough and the Met department has already issued a warning to fishermen not to venture into the sea for the next few days.

Meteorologists said Mora will ensure that the monsoon will arrive in the city on time. Usually , monsoon hits Kolkata between June 10 and June 15.