Unruly flyers to be banned 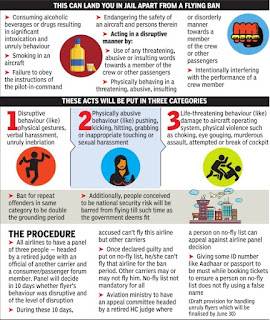 The Centre has announced new rules for a `No-fly list' for unruly passengers, which will even include suspension for offences. This is for the first time in the history of civil aviation that a no-fly list is being proposed to address the issues pertaining to civil aviation safety. According to the Ministry of Civil Aviation, the offences have been categorised in three levels. Level one constitutes disruptive behaviour like physical gestures. Level two will include physically abusive behaviour like pushing, kicking and sexual harassment. Level three will include murderous assault or life-threatening behaviour and damage to the aircraft operating systems. The punishment for unruly behaviour will be three months for the first level, six months for the second, and two years or more for the third level.
“If any untoward incident occurs, the airline can immediately ban the passenger, after which the process will be completed in the next ten days,“ minister of state for civil aviation Jayant Sinha said. The draft was made public by aviation minister Ashok G Raju and his deputy, Sinha. The draft will have a one-month window for the public to comment. The aviation ministry will then take some time to study them and come out with the final civil aviation rules.