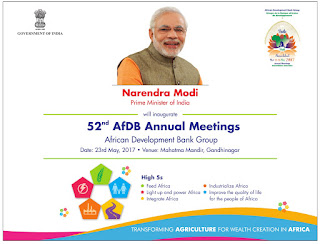 Union finance minister Arun Jaitley said that India-Africa partnership could provide limitless opportunities for the future and that the two sides were engaging on a scale not witnessed earlier.
“If India is a bright spot, then Africa is not very far away. India-Africa partnership provides limitless opportunities.India, Africa together can shape future of the world,“ Jaitley said at the opening session of the annual meetings of the African Development Bank (AfDB) Group. He said the “High 5“ agenda of AfDB was not different from Indian policy.

Highlighting India's historical, cultural, economic, educational and technical ties with Africa, PM Narendra Modi underscored that Africa has been made a top priority for India's foreign and economic policy since he assumed office in 2014.

Reiterating India's commitment to support development of Africa, Modi pushed for an “Asia-Africa growth corridor“ supported by Japan and India-a pitch that comes close on the heels of China's multi-billion dollar OBOR initiative.

“India is also working with the US and Japan to support development in Africa. During my visit to Japan and after meeting with PM Abe, I recall that in our joint declaration we mentioned the Asia-Africa growth corridor and proposed further conversation with our brothers and sisters of Africa,“ the PM said while officially opening the African Development Bank's annual meetings, being held in Gandhinagar. The ceremony was attended by presidents of Benin and Senegal, the vice-president of Cote D'Ivoire and many other heads of state of African countries. “Research institutes of India and Japan have come up with vision documents in consultation with African think tanks on how to take forward this growth corridor,“ Modi said, adding that this vision document would be presented at the board meeting later.

The idea is India, Japan and other willing partners would explore joint initiative in development of skills, infrastructure, manufacturing and connectivity .

In the sports arena, India cannot compete with Africa in the long distance running. But I can assure you that India will stand with Africa and support the continent in long and difficult race for better future.

Expressing a hope that AfDB event will further cement the relationship between India and the countries of African continent, union finance minister Arun Jaitley stated that the 21st century will not only be Asia's century alone but it will belong equally to both Asia and Africa.

AfDB president Akinwumi Adesina, too, stated that the bank would be looking forward to creation of India-Africa co-financing facility in near future.