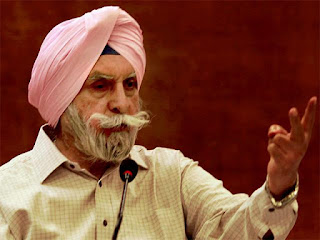 Supercop, the man who wiped out terrorism from Punjab... Kanwar Pal Singh Gill, popularly known as KPS Gill, was a leader among pygmies. The news of his death was heart-breaking, especially because Gill was a true nationalist.

Had Gill not reclaimed Punjab from Khalistani extremists and restored peace within the two years that he headed the state as the director general of police (between 1991and 1993), India would never have been the same again.There were several DGPs in Punjab before Gill took charge, but none could achieve what he did. Remember, Gill came on the scene when the state was going through a massive turmoil of the Khalistan separatist movement.

Sadly, in his lifetime, Gill was never recognised for his policing. On the contrary, he was recipient of denigration with impunity. The Khalistanis, spread over the diaspora, have been running a malicious campaign against his phenomenal work in restoring normalcy in Punjab.

Besides his counter-terror work in Punjab, Gill will be remembered for controlling law-and-order situation in Assam and Meghalaya, where he was posted when he joined the IPS in 1958.

Even in Gujarat in 2002, it was KPS Gill who brought peace to a raging, rioting state within a week of taking charge as advisor to the government. He had relied on the same state police to put down the riots, after his request for a team from the Punjab Police was turned down.

It is surprising that there will be no state funeral for Gill.