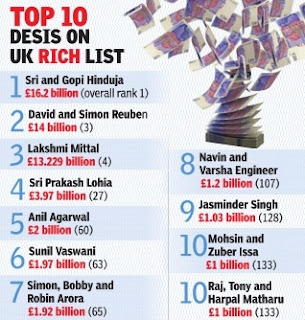 The wealthiest persons in Britain are India-born, according to the Sunday Times Rich List 2017, which places the Hinduja brothers Srichand and Gopichand at the very top of 134 billionaires. The brothers' estimated riches: £16.2 billion, £3.2 billion more than last year's. David and Simon Reuben, of Iraqi Jewish origin but Mumbai-born, have slipped from first to third place this year with an estimated wealth of £14 billion.