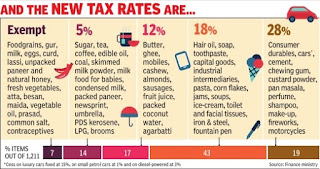 The GST, which is set to be rolled out on July 1, is likely to have a benign effect on household budgets with finance minister Arun Jaitley declaring that its impact “will not be inflationary“ and in some instances, prices are even likely to drop.

A host of daily consumption items such as milk, fruit and vegetables, jaggery, foodgrain and cereals have been exempted from tax while others such as sugar, tea, coffee, edible oil, mithai, and newsprint have been placed in the lowest slab of 5%.

The GST Council, the apex decision-making body for the new tax, took tangible steps toward finalising the tax framework on day one of its two-day meeting in Srinagar.

The overall tax burden on the average household will decline after implementation of GST. All chemicals and intermediate goods will be in the 18% slab.

The council will decide on fitment of services in tax slabs and taxation of six items on Friday . The issues in the goods category relate to taxation of gold, textiles, bio-diesel and bidis, as also differential taxation of high-priced and low-priced products in the same segments such as packaged cereals, biscuits and footwear.

Some states such as Kerala have demanded a 5% rate on gold, saying luxury items should attract a higher rate. Industry bodies representing footwear and biscuits have demanded that their lower-priced products be taxed at 5% or exempted.