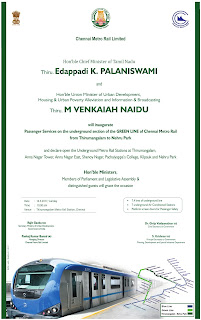 The first train glided smoothly out of the Thirumangalam underground station at 11 am and zipped nonstop to Nehru Park within 10 minutes. Commercial services started at 2 pm and, with stops along the way at Anna Nagar Tower, Anna Nagar East, Shenoy Nagar Pachaiyappa's College and Kilpauk, the rides took 20 minutes in either direction. Metro officials announced a 40% fare discount for a week. In a significant bonus for long-distance commuters, CMRL has also resumed direct services between Nehru Park and Chennai airport -a distance of 23 km, with one train every 30 minutes.

Naidu said the Centre is formulating a new metro rail policy to enable innovative financing through ventures such as land value capture and transit-oriented development for new metro projects, and stressed on the need for metro rail to have in place multi-modal transport integration. The latter includes bus stations, railway stations, other forms of public transport and parking management system to discourage private transport.

Palaniswami said the state government has sanctioned an agreement in principle for Phase-2 of the project, which requires central funding. “We have recommended that the Centre approve and fund the project,“ he said. “Japan International Cooperation Agency has included the project in its rolling plan for the year 2016-2017,“ he said.