GM Goes Off the Road in India 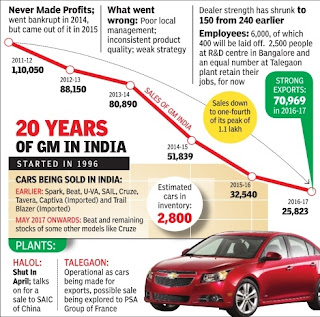 General Motors will stop selling its vehicles in India by the end of this year, after the American automaker failed to find traction in a market it entered more than two decades ago. The Detroit-based automaker will, however, continue to make in India, utilising its Talegaon, Maharashtra, facility to export cars, particularly to Central and South American markets.

The pull-out from the local market will affect about 400 employees at the Talegaon factory, or about 8% of the India workforce, for whom the company said it is working on a severance package. GM said it is also in talks with dealers on a transition plan and assured that it will continue to honour all warranties and provide after-sales support to customers.

The decision is part of a global restructuring exercise to focus capital and resources to more lucrative business opportunities. The company announced exits also from South Africa and East Africa, as chief executive Mary Barra wants to turn focus away from markets where the margins are small. Over the past few months, it has also ceased operations in Venezuela, sold off the money-losing Opel and Vauxhall brands to the PSA Group, opted to drive out of Russia, halted manufacturing in Indonesia and Australia, and restructured operations in Thailand. In India, it stopped production at its Halol factory in Gujarat last month and also scrapped plans to invest $1 billion to introduce a new emerging market platform.

GM makes the Beat hatchback, the Cruze sedan and utility vehicles Tavera, Enjoy and Trailblazer in India and sell them with the Chevrolet tag.

Though it was one of the early overseas automakers to enter India -it introduced the Opel brand in the country in 1996 -GM has never gone beyond being a fringe player here and has been accumulating losses.

GM has “no plans to review“ its decision or to recommence sales in the local market utilising an alternate brand from its portfolio, its India chief Kaher Kazem said.

The company said the greatest opportunity in India for it to drive shareholder return is in focusing on exports from here. In fact, its export from the Maharashtra facility has more than tripled last fiscal year to 70,969 units.

Meanwhile, negotiations are ongoing for the sale of the Halol plant, where GM ceased operations on April 28. The plant is expected to be taken over by its Chinese partner SAIC. The Competition Commission of India has approved SAIC's plan to acquire the facility , but MG Motor India, a subsidiary of SAIC will move into Halol only if pending labour issues are settled. The Halol factory , which has a manufacturing capacity of 1.1 lakh units a year and employs 1,100, was originally planned to be shut by mid-2016.

GM said it has 150 dealer outlets in India and that a blueprint is being firmed up to maintain after-sales centres to support customers. The GM Technical Centre-India in Bengaluru, which has around 2,500 employees, performs global work for GM. This work is not impacted by this announcement, the company said in a statement.