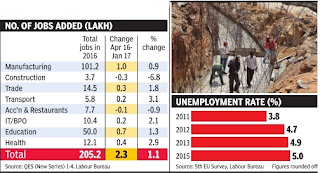 While the economy is growing at just over 7% per year, jobs increased by just 1.1% last year. An earlier report had pegged joblessness at a five-year high of 5% in 2015, and under-employment at a staggering 35% of the over-15 years labour force. Seen in this context, the government is clearly facing a growing employment crisis which its various initiatives are unable to address. Both reports are based on large surveys carried out by the Labour Bureau. Job growth is tracked by a revamped quarterly survey of over 10,000 units while unemployment is recorded in an annual survey of 7.8 lakh persons. The new quarterly survey started in April 2016 and replaced an earlier one which covered certain export-oriented sectors.

Recent reports of several IT and BPO majors shedding jobs has added to the worries of people, especially urban middle-class families which had been riding the IT boom. Global slowdown in IT services and components and new visa restrictions are thought to be the cause behind this.

Several other indicators explain this painful situation. Gross credit given to industry has grown by just 6.7% in the past three years, the index of industrial production has inched up by just 6% and growth in gross fixed capital formation slipped to an alarmingly low 0.6% in January this year compared to 6.1% last year.

A total of 2.3 lakh jobs were added to the eight sectors covered in the quarterly survey including manufacturing, construction, trade, transport, accommodation and restaurants, IT-BPO, education and health.

Interestingly, nearly half of the new jobs added were in education and health. Both these sectors are known for low paying jobs. Construction and the hospitality-food sectors showed loss of jobs, the most serious ones, amounting to a dip of nearly 7%, in construction. One usually neglected aspect of India's unemployment crisis is of under-employment or concealed unemployment. This is of two types ­ not finding work for full year and work at very low wages. The Labour Bureau's 2016 report on unemployment gives a dire picture on both fronts.

Only 61% of people in the workforce were found to have year-round jobs with 34% working only 6-11 months even though they were willing to work for 12 months. The report also revealed that 68% households were earning only Rs.10,000 per month or less.In all, nearly 16 crore persons in the workforce were underemployed in this manner.