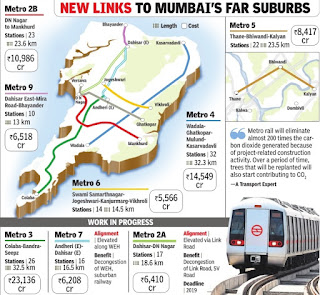 In a move that will bring the far suburbs closer to the heart of Mumbai, the MMRDA plans to start construction work on five Metro corridors by December 2017. The corridors are: DN Nagar-Mankhurd; Wadala-Ghatkopar-Mulund-Kasarvadavli; Thane-Bhiwandi-Kalyan; Swami Samarthnagar-Jogeshwari-Kanjurmarg-Vikhroli; and Dahisar East-Mira Road-Bhayander.

The new alignments are expected to improve connectivity across fast-growing suburbs, which are heavily reliant on road and rail networks. Areas such as Bhayander, Mankhurd, Kalyan and Bhiwandi have recorded a surge in residential populations, which necessitate urgent expansion in transport and allied urban infrastructure.

Within Greater Mumbai limits too, suburban rail network and arterial roads like the Western and Eastern Express Highways, and SV Road and LBS Marg bear a disproportionate share of the commuter burden. The Metro lines would help to declog these routes and cater to areas a bit further removed from the immediate vicinity of these trunk lines.

The five routes are likely to be commissioned for passenger traffic by 2022. The MMRDA has allotted almost half of this year's Rs.6,976 crore budget for Metro projects. At present, the city has a 12 km Metro line (Versova-Andheri-Ghatkopar), which opened in June 2014, and work is in progress on three routes: Colaba-Bandra-Seepz (Metro 3); Andheri-Dahisar (Metro 7); and Dahisar-DN Nagar (Metro 2A).The government has set a deadline of 2019 for Metro 2A and Metro 7. The first phase of Metro 3 is likely to be commissioned by 2021.

The commissioning of just Metro 3 will help in the reduction of 6.6 lakh vehicle trips a day. Experts say it would help decrease 6,000-10,000 tonnes of carbon dioxide emissions per year, besides bringing about an equal amount of reduction of particulate matter, hydrocarbons, nitrogen oxides and carbon monoxide. An expert said this will be the equivalent of planting 2.5-4.5 lakh full-grown trees across Mumbai every year.

The biggest benefit of Metro rail will be on suburban railway commuters. Both Central Railway and Western Railway carry around 75 lakh passengers per day. The introduction of a Mass Rapid Transit System will decongest local trains, which witness at least a couple of deaths per day due to people falling off overcrowded coaches.