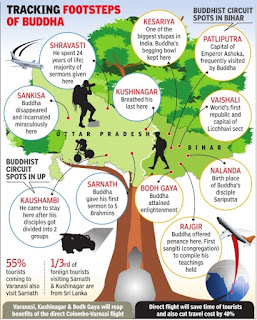 PM Narendra Modi's decision to announce a direct flight between Colombo and Varanasi is intended to leverage an ancient cultural connection and tap India's soft power potential in boosting ties with Sri Lanka and checking China's influence. Modi's announcement during his ongoing visit to Sri Lanka was welcomed by Buddhist monks in Varanasi and is expected to give a strong fillip to spiritual tourism along the Buddhist circuit. Not only will the flight make the journey from PM Modi's constituency to the Sri Lankan capital cheaper by 40%, it will also reduce travel time to just about five hours.

The air connection is in sync with Modi's consistent focus on using India's Buddhist legacy in diplomacy and outflanking China's economic overtures to subcontinent such as the Hambantota port in Sir Lanka.

China too has worked to present itself as central to Buddhist traditions but its appeal suffers from a history of anti-religious policies and its economic aid is seen attached to `restrictive' conditionalities. On the other hand, sites closely linked to Buddha's life in India such as Sarnath and Bodh Gaya give it a credible claim to Buddhist traditions.

Industry stakeholders say a visit to Sarnath and Bodh Gaya is very significant to Buddhists.
﻿