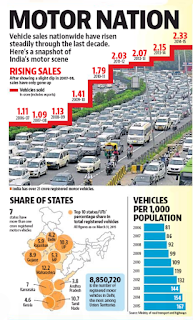 Automakers are expected to invest Rs.51,600-64,500 crore in India over the next three-four years to set up factories and expand production in a market that is set to become the third-largest for passenger vehicles by the turn of the decade. The investment will boost production of cars, utility vehicles and vans in India by 1.3-1.5 million units a year and generate employment for 20,000-25,000 people.

India market leader Maruti Suzuki and parent Suzuki, Korea-based Hyundai Motor and unit Kia Motors, Chinese manufactures SAIC, Changan and Beiqi Foton, as well as Italy's Fiat are among companies that are expected to drive the investment. These will be in addition to more than Rs.1 lakh crore that automakers are set to spend on upgrading vehicles to meet new safety and emission standards.

Annual passenger vehicle sales in India, currently the fifth-largest market, topped the three-million mark for the first time in fiscal year ended March 31, growing in the double digits. With a fast expanding economy, rising disposable income and increasing need for mobility, India is forecast to post annual passenger vehicles sales of more than five million by the end of the decade.

The passenger vehicles industry currently has a production capacity of more than 5.5 million. While a few facilities are running below capacity, some companies are utilising India as a base for exporting vehicles.

Japan's Suzuki Motor is particularly aggressive with its investment plans, encouraged by the solid performance of Maruti, which has single-handedly driven growth in the industry in the past five years. Suzuki is likely to infuse $780 million in a third factory in Gujarat by 2020, taking its cumulative investment in the state to more than $1.5 billion. Maruti, which accounts for almost half the Indian market, will sell the vehicles manufactured by its parent in India, as the local entity aims to double sales.

Separately, Maruti will be investing Rs.1,900 crore for its second phase of expansion at an R&D centre in Rohtak, Haryana, which will be commissioned in early 2019. The company has a capital expenditure plan of Rs.4,500 crore for the current fiscal year.

Kia, the Hyundai subsidiary, last month announced a $1.1 billion investment to set up a factory in Andhra Pradesh.

Hyundai Motor India plans to invest $2 billion on products alone and is eyeing output of one-million units out of India by 2020-2021. The company, which is operating at 95% capacity, may utilise the Kia factory to meet increased volume requirement in the near future, but people in the know said it has already given feelers to the Tamil Nadu government for the next phase of expansion. Its current facility is situated near Chennai.

The automotive industry, including component manufacturing, is estimated to grow to Rs.16.16-18.18 lakh crore by 2026, according to estimates by industry body Society of Indian Automobile Manufacturers Association. 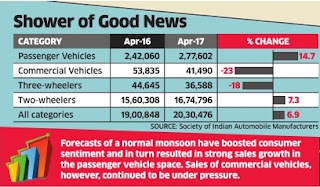