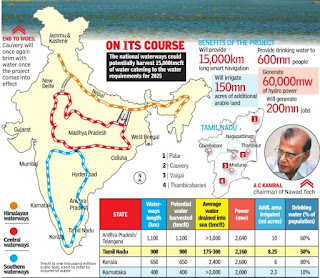 Water shortage in the country is getting worse by the day. Many farmers commit suicide and many cities, towns and villages struggle for drinking water in India which, to quote eminent British engineer Arthur Cotton, “has enough water for all the conceivable purposes, ten times over.“

The temporal and spatial variability of rainfall across the country wreaks havoc by causing drought in many regions and floods in a few others. The vagaries could only get worse owing to continuing climatic changes. Besides, a large quantity of water gets drained into the sea as India does not have sufficient storage capacity . About 7,700 thousand million cubic feet of water is wasted annually as run-off into sea in the five southern states alone.

With a view to mitigate the water shortage, a Madurai-based NGO, Nawad Tech, has suggested a National Waterways Project as an alternative to the interlinking of rivers, which the National Water Development Agency has been pursuing. “The existing gravity canal-cum-storage dam technology is not suited to deal with extreme variation in rainfall. Gravity canal technology is meant for delivering water for immediate consumption or storage. On the other hand, NWP envisages contour canals, which will be a linear and smart dam system. It will take the storage to areas where water is available against the traditional method of transferring water to storage areas. In short, water will flow from Ganga to Cauvery and vice versa,“ said A C Kamaraj, chairman of Nawad Tech. “The Vajpayee government changed the face of rural India through the golden quadrilateral project. It made travelling on highways a pleasant experience and opened up our hinterland for investments. The Modi government could do a similar feat by implementing the NWP that will not only interlink all major rivers through a 15,000 km long canal, but also facilitate inland navigation, promote tourism and provide drinking water to most of the states, and above all irrigate close to 150 million acres of arid land. NWP will harvest close to 15,000 tmcft of surplus water to fulfill India's requirement in 2050,“ said Kamaraj.

Inland navigation has huge potential for growth in India. When 47% of cargo moves through inland waterways in China, 43% in Japan and 40% in Europe, it is only 3.3% in India. One spends Rs.2 per tonne per km for cargo transportation by road, but only 40 paisa per tonne per km via waterways. India was a land of waterways. It is the indiscriminate construction of low-level bridges that killed inland navigation.

“All inter-basin projects such as Cauvery and Mullaperiyar suffer owing to legal disputes. The Union government has been unable to enforce even the Supreme Court's orders in these disputes. Even the interlinking of rivers is stuck owing to non-cooperation of many states,“ said K Jeyachandran, one of the directors of Nawad Tech.

The project was estimated to cost Rs.5.35 lakh crore in 2003 and was expected to generate returns to the tune of Rs.1 lakh crore per annum, said Kamaraj.

Like any major project, the NWP also has challenges. Land acquisition and securing environmental clearance will remain major hurdles.

The project may be theoretically possible, but will it see the light of the day? “Contour canal system with zero flow is new to India. It has to go through a technical scrutiny. All our existing water systems are unidirectional in flow. Sharing of water among various states could be a problem in a contour system unless an agency regulates it. But NWP could be tried out in a limited area as a pilot project,“ said R Jayaseelan, former chairman of Central Water Commission.