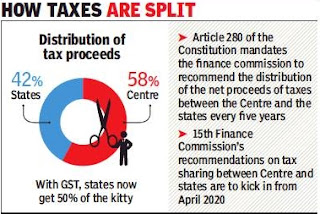 The Union Cabinet approved setting up of the 15th Finance Commission to decide on the new formula for sharing of resources between the Centre and the states.

The new commission will have a heavier agenda, given major changes following introduction of GST. In addition, the committee on amendments to the fiscal responsibility law, headed by former Planning Commission member N K Singh, had also sought a detailed examination of its proposal by the new finance commission to cap state debt at 20% of GDP, while capping overall government debt at 60% of GDP.

The 14th Finance Commission headed by former RBI governor Y V Reddy had prompted the government to introduce major changes in the way spending took place. From April 2015, the Centre has virtually abolished centrally-sponsored schemes and transfers funds directly to the states, which are free to decide their spending pattern based on their requirements. This change had led to accusations of the Centre slashing spending on key sectors. It also did away with the distinction between plan and non-plan expenditure, prompting the Narendra Modi government to do away with the decades old classification.

In addition, with 42% of the taxes collected by the Centre transferred to the states (as suggested by the 14th Finance Commission), the Union government has less cash at its disposal and limited elbow room in deciding spending priorities, considering that repayment of loans, salary and pension payments eat up a large chunk of the funds. Earlier, 32% of the Centre’s tax revenue, excluding cesses and surcharges, was transferred to the states as recommended by the 13th Finance Commission.

Asked whether the 15th Finance Commission will also allocate more resources to the states, Jaitley said, “I think let us not pre-judge the situation. India is a Union of states, the Union also has to survive.”