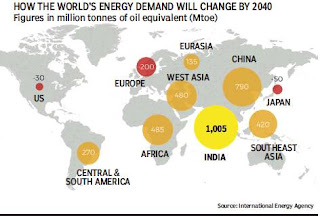 It’s hard to say whether we will still be getting by on inverters and diesel generators in 2040, but India certainly will consume a lot more energy than it does today. The International Energy Agency expects world energy demand to increase by about a third over the present level by 2040, but India’s energy consumption will increase the most, by the equivalent of 1,005 million tonnes of oil. It does not mean we will be burning 1 billion tonnes of oil more than we do today, but our extra energy consumption — from solar, nuclear, hydel and all other sources — will be equivalent to that much more oil. By 2040, India will account for 11% of the world’s annual energy consumption, but considering that it will have 18% of the global population, that figure is less than impressive. Energy demand will slow down in Russia, and fall in ageing Japan, USA and Europe.