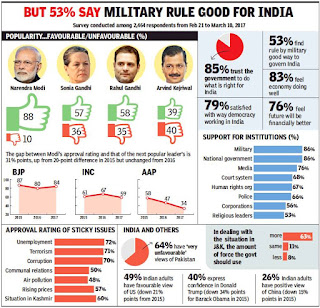 Past the three-year mark as Prime Minister, Narendra Modi continues to retain his popularity according to a survey by Pew Reseach Center that says nine out of 10 respondents hold a favourable opinion of the leader and approve of how India is doing.

A survey of 2,464 respondents during February 21 to March 10 this year found that Modi enjoys stronger support in south India, where 95% of the respondents were favourably disposed as opposed to only 4% who disapproved. The figures were high nationwide with as many as 88% supporting the Prime Minister.

The Modi appeal was visible with regard to other political rivals as well. While the survey found a 57% approval rating for Sonia Gandhi, it was 58% for Rahul Gandhi. Aam Aadmi Party chief Arvind Kejriwal came a distant fourth at 39%. These percentages are the result of a yes-no question regarding individual leaders.

Modi’s lowest ratings are for handling of communal relations, at 50%, and for his efforts towards curbing air pollution, at 48%. Women are particularly critical of how he has dealt with communal relations, as are people in north India. Rural Indians are less supportive than those in urban areas of his handling of both communal relations and air pollution. The interesting bit is that the survey shows BJP continues to enjoy public support. The Pew survey notes that more than eight in 10 Indians have a favourable view of the party as against six in 10 who expressed support for Congress. “But the gap between BJP and Congress backing, which was 26 points in 2015 and then narrowed to 13 points in 2016, has widened again to 25 points,” the survey notes. Indians in rural areas (63%) are more supportive of Congress than those in cities (51%). The survey said 85% of those surveyed trust the government to do what is right for India, while 79% are satisfied with the way democracy is working in India. Nearly three-quarters (73%) of the sample group said a lack of employment opportunities is a major problem.

A comparable share (72%) approved of the PM’s handling of this issue, an assessment which is up 10 points over 2016.

A similar share of respondents cited corrupt officials (74%) and terrorism (76%) as big challenges, and roughly seven in 10 Indians approved of Modi’s record in dealing with the problems. Approval of his handling of corruption is up 11 points and support for his dealings with terrorism is up 10 points.