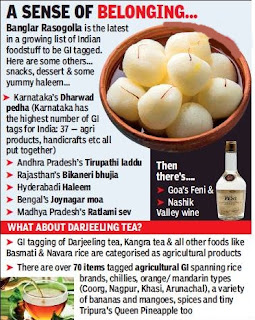 It was a bitterly fought battle, but West Bengal tasted sweet success in the end. The state on Tuesday won the geographical indication tag for “Banglar rasogolla” beating Odisha. The verdict comes after a 26-month battle that the two states fought in the intellectual property wing of the ministry of commerce, which confers the GI tag.

CM Mamata Banerjee tweeted, “Sweet news for us all. We are very happy and proud that #Bengal has been granted GI status for rosogolla.”

Reacting to the news of Bengal rasogolla getting the GI tag, Odisha finance minister Shashi Bhushan Behera said, “This is not a loss for Odisha as we have not yet filed an application with the Geographical Indications Registry. Once we apply, it will look into the matter and Odisha may get a GI tag for its very own rasogola.”

While the Bengali name for the sweet is spelled with two Ls because of the stress on the letter, the Odia name has a lighter ‘L’ sound and is transliterated as “rasogola”. Bengal perhaps never imagined that it would one day have to fight for the rasogolla, but the Odisha government’s 2015 statement that the day of Ulta Ratha be declared Odisha’s “rasogola day” shook Kolkata. Soon, Odisha applied for a GI tag on the rasogola and Bengal’s science and technology department, prodded by thousands of rasogolla fans, lodged a counter-claim. In September 2015, the state prepared a dossier containing all the proof — documents, historical texts and analogies—in support of its claim that the rasogolla belonged to Bengal and had been invented in two stages in two completely different historical time zones.

Bengal claimed that Naveen Chandra Das had introduced the sweet in the state in 1869. The Odisha government, on the other hand, has collected documentary evidence that points to the origin of a very similar sweet in Odisha that has even been offered at Puri’s famed Jagannath Temple since the 12th century.

Bengal explained that the art of rasogolla-making lies in the use of chhana (Bengal-style cottage cheese). “Bengal is the only state that uses chhana, which is curdled milk, to make sweets. The process of curdling is considered ‘unholy’ by most communities, including Odiyas, who never offered any sweet to Lord Jagannath made of chhana. The temple records that contain details of the food that can be served to Lord Jagannath do not mention rasogola,” said Mohua Hom Chowdhury, a representative of the state science & technology department.