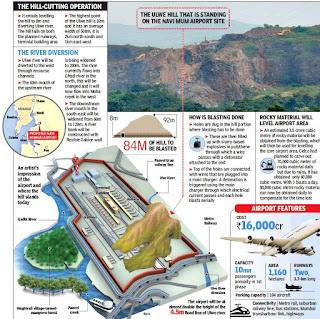 Imagine a natural formation as high as a 20-storey building, which is 2 km north-south and 1 km east-west, being flattened. This is what is happening at the Navi Mumbai International Airport site as a 90 m hill is being levelled to 8 m to make way for a runway and the project’s core area.

The hill is being blasted in the afternoon and evening everyday in order to raze it. To speed up hill-cutting, City and Industrial Development Corporation, the project’s nodal development authority, is now planning to blast the hill during mornings as well. The work, which began in July, has been delayed due to monsoon, which withdrew only in October, and protests by project-affected persons. In the coming weeks, the hill will be blasted thrice a day—7 am to 8 am, besides the earlier 1 pm to 2 pm and 5 pm to 6 pm. It will take two years to level the hill.

Interestingly, when villagers were refusing to hand over the hill, the Cidco was considering an alternative —reclaim an island in the sea near Panvel creek. In Singapore and Hong Kong, airports have been built on land reclaimed from sea. But villagers in the area agreed and Cidco could go ahead with the hill cutting.

The rocky material obtained from the blasting will be used to raise the level of the land around the hill to 5.5 m. Thereafter, the operator will raise it by another 2.5 m to level it with the hill. The operation also includes diversion of the eponymous river (Ulwe) on the southern end. Three contractors have been engaged for this operation. The Navi Mumbai International airport is being built at a cost of Rs.16,000 crore, of which Rs.5,534 crore is allotted for the first phase. The pre-development work, which is in the first phase, will cost 37% (Rs.2,033 crore) of the cost.