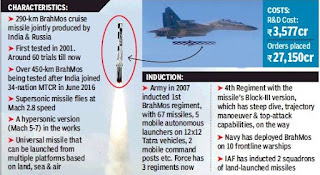 Soon, India will have the formidable precision strike capability to take out terror camps, underground nuclear bunkers, aircraft carriers on the high seas and other military targets from long or ‘standoff’ distances by day or night in all weather conditions.

In a big leap towards inducting this deep surgical strike capability, the BrahMos supersonic cruise missile, which flies almost three times the speed of sound at Mach 2.8, was successfully tested for the first time from a Sukhoi-30MKI fighter jet in the Bay of Bengal at about 10.40 am yesterday.

The air-breathing missile, after the ‘gravity-drop’ of around 200 metres from the fighter that had taken off from the Kalaikunda airbase, kicked off its booster to attain supersonic speed within seconds and then zoomed ahead to hit the ship or ‘battle practice target’ with pinpoint accuracy to blow it to smithereens at a range of 260 km. The 2.5-tonne BrahMos-ALCM (air-launched cruise missile) “can also easily go over 400 km”, like its 2.9-tonne land and ship-launched variants already inducted into the armed forces. The BrahMos missile combined with the Sukhoi-30MKI fighter, which has a cruising range of 3,200 km or a combat radius of about 1,500 km without mid-air refuelling, constitutes a decidedly deadly weapons package.

The conventional (non-nuclear) weapon, for instance, can target Chinese aircraft carriers and other warships, or block Pakistan’s Gwadar port by sinking a few ships in the harbour for that matter. “The world-class BrahMos is now capable of being launched from the land, sea and air, completing the tactical cruise missile triad for India,” the defence ministry said.

The IAF, on its part, said, “The missile’s capability coupled with the Sukhoi-30MKI’s superlative performance gives IAF strategic reach and allows it to dominate the ocean and the battlefields.” It has already placed orders worth Rs.6,516 crore for the BrahMos-ALCM, which takes the total orders for the missiles to Rs.27,150 crore from the three Services till now. “The deliveries of ALCM can begin in early-2018 after an air-to-ground test. It’s a proven missile,” said a source.

PM Modi, in a tweet, expressed “delight” and congratulated “all those associated with this remarkable feat”. BrahMos Aerospace chief Sudhir Mishra, on being contacted, said his organisation was “committed to continue providing the world’s fastest supersonic cruise missile to the Army, Navy and IAF”. With the IAF having inducted 240 of the 272 twin-seat Sukhois contracted from Russia for over $12 billion, 42 of the fighters are to be eventually armed with BrahMos missiles. As of now, with the help of Hindustan Aeronautics Ltd, only two Sukhois have undergone the structural, mechanical, electrical and software modifications needed to integrate the heavy missile with the fighter for flight trials.

The government has also approved the deployment of Block-III version of the BrahMos land-launched missile, which has “steep dive, trajectory manoeuvre, and top-attack capabilities” for mountain warfare, in Arunachal Pradesh as a deterrent against China. With India joining the 34-nation Missile Technology Control Regime in 2016, which “removed the caps” on the range of the missile developed jointly with Russia, the armed forces are also testing an extended range BrahMos that can hit targets 450 km away.