The fastest growing airline in the world 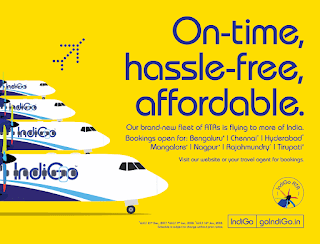 The report also notes that Indigo has one of the youngest airline fleets among the top 20 airlines with an average aircraft age of 6 years. It had 138 aircraft in its fleet, and had ordered 456 narrow body aircrafts, the report said. “The fastest growing of the Top 20, Indigo is India’s biggest low-cost carrier. Still serving predominantly the Indian domestic market but recording strong growth on international capacity too,” the report noted.

Indigo, which faced a lot of criticism following an incident of ground crew assaulting a passenger at Delhi airport, continues to dominate the Indian skies with a market share of 39.5 per cent. Jet Airways is a distant second with 15.5 percent.

On November 17, Indigo took delivery of the first of its order of 50 ATR aircrafts at a ceremony in Toulouse, France. The ATRs will add to its existing fleet of A320 aircraft as it aims to touch a target of 1000 daily flights by December 2017.

The airline has placed an order for 50 ATR aircraft.