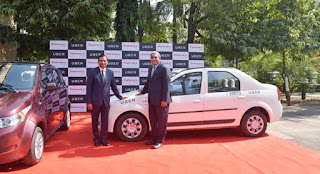 Automaker Mahindra and Mahindra has entered into a partnership with Uber India to deploy electric vehicles on the US cab aggregator’s platform, beginning with a few hundred vehicles in Delhi and Hyderabad in February next year before expanding to other cities in the country.

The initial three months will be used to get the infrastructure in place for seamless trips, the two companies announced.  The tie-up comes close on the heels of the tie-up between Tata Group and Jayem Automotives to deploy electric Nano rebadged as Jayem Neo in Delhi through Ola, Uber’s Indian rival.

M&M’s electric vehicles on the Uber platform will include the e2oplus hatch and the e-Verito sedan. M&M managing director Pawan Goenka said that electric vehicle adoption is clearly gaining momentum in India and the industry is at the tipping point since there is an intention of support from all stakeholders including vehicle makers, shared mobility providers and state governments.

Through this partnership, driver partners on the Uber app can avail themselves of a package which will include M-M’s electric vehicles at competitive prices, attractive financing and insurance premiums as well as comprehensive maintenance package.

Out of the 6-7 lakh EVs sold globally at the end of 2016, India’s share was only about 2,000. However, after the execution of 10,000 vehicle orders, the domestic market will almost triple, Goenka said.

The company had last year planned to ramp up capacity tenfold to 5,000 units a month. The company had entered into a tie-up with Ola for a pilot project in Nagpur, where it has deployed several hundred cabs that have clocked more than a million kilometres. Goenka said the project has been very successful and expansion to Delhi and Hyderabad will further accelerate electrification.

To make this model sustainable, both partners plan to work closely with public and private players who are in the process of setting up a common use charging ecosystem at multiple locations in the cities.