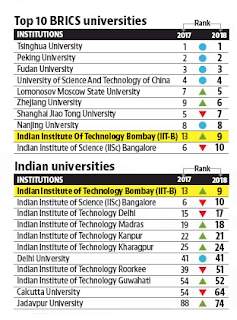 Two Indian institutions have made it to the top 10 of a ranking of universities in the BRICS bloc of nations, compared with just one last year.

IIT-Bombay has moved up to the 9th spot in the QS World University Rankings: BRICS 2018, from 13th last time, making its debut in the top 10. IISc-Bangalore has slipped four positions to the tenth from sixth.

Two more Indian institutions feature among the top 20 — IIT-Delhi, which has fallen to 17th place from 15th, and IIT Madras that climbed a spot to 18th.

As many as 65 Indian universities have been ranked this time — more than Brazil (61) and South Africa (12), but fewer than Russia (68) and China (94). The top four universities in the BRICS ranking are from China: Tsinghua University, Peking University, Fudan University and University of Science and Technology of China.

Research productivity of India’s universities is also one of its strengths. Three Indian universities — IISc-Bangalore, Institute of Chemical Technology-Mumbai and IIT-Delhi — have received 100 out of 100 for papers-per-faculty. All of the top seven scores for this indicator are achieved by Indian universities.

Quantity of Indian research, however, is greater than its average quality, the statement added. QS’s Citations per Paper metric measures the impact of a university’s research output. No Indian entrant achieves a top-10 score for this indicator, which is dominated by Chinese universities.