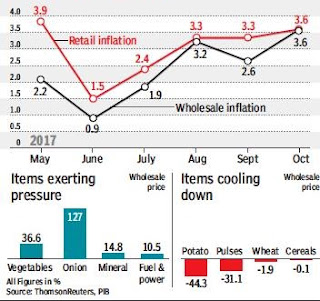 Rising food, vegetable and fuel prices pushed wholesale price inflation to a six-month high of 3.6% in October, dimming hopes of a cut in interest rate when the RBI meets to review monetary policy next month.

Inflation measured by the wholesale price index, rose an annual 3.6% in October, higher than the previous month’s rise of 2.6% and 1.3% increase in October 2016.

The jump in WPI inflation in October mirrors the rise in retail inflation, which accelerated to a seven-month high of 3.6% on the back of an increase in food, fuel and housing prices.

Policymakers hoped that the rising trend would be reversed soon. Economists said they expect WPI inflation to be around 3.5-4% by the end of the current financial year, but rising global crude could put pressure on domestic prices in the months ahead. They said an increase in excise duty on petrol & diesel last month would also add to pressure.