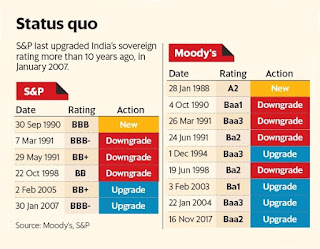 Global ratings agency Standard & Poor’s kept the sovereign rating and outlook for India unchanged, saying its stable outlook reflects that growth in the next two years will remain strong and fiscal deficits will remain broadly in line with the agency’s forecast.

S&P kept India’s rating at BBB-, a notch above investment grade. “Ratings are constrained by India’s low wealth levels, measured by GDP per capita, which we estimate at close to $2,000 in 2017, the lowest of all investment-grade sovereigns that we rate,” S&P said.