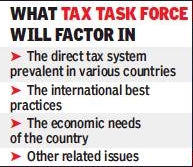 After an overhaul of indirect taxes, the government has announced a review of direct taxes, a move that may impact your tax rates and exemptions in the coming years. The review came months after PM Narendra Modi observed that the income tax law was drafted 56 years ago and needed to be re-drafted

The task force will be headed by Arbind Modi, currently member-legislation in CBDT, who had helped draft the Direct Taxes Code, eight years ago. The draft law was unveiled by former finance minister Pranab Mukherjee and was significantly watered down by his own team. The DTC Bill, which was introduced in Parliament in 2010, lapsed with the dissolution of the 15th Lok Sabha. It was eventually junked by the Modi government a few years ago.

Tax officers have, however, said several of the proposals have been incorporated in the existing I-T Act. The DTC was originally proposed by former finance minister P Chidambaram but he had moved to the home ministry by the time the draft was ready. Apart from Modi, the panel will have chief economic adviser Arvind Subramanian as a permanent special invitee, along with G C Srivastava, former IRS officer and advocate, Rajiv Memani, chairman and regional MD at consulting firm Ernst & Young, chartered accountant Girish Ahuja, tax lawyer Mukesh Patel, and Mansi Kedia, a consultant at ICRIER, a think tank.

The task force has been given six months to submit its report. It is mandated to draft a law that is in line with tax laws prevalent in other countries and that incorporates international best practices. With the Budget to be presented in February, it is unlikely that the Modi administration will introduce a Bill to rewrite the I-T Act before the 2019 general elections. “This steadfast focus will enhance India’s competitiveness and make the country future ready,” Memani, a member of the panel, said.

Tax experts said the focus should be on ways to reduce litigation by making the tax regime more predictable, while reducing the rates along with exemptions, especially for the corporate sector.