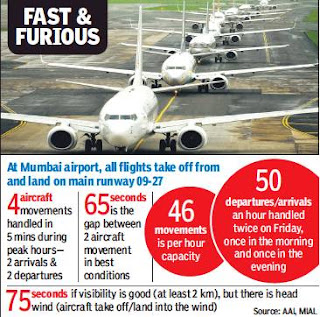 Creating a new world record for single-runway operations, Mumbai airport handled 969 take-offs and landings in 24 hours on Friday. It broke its own record of 935.

Mega cities such as New York, London, Dubai and Delhi have airports with two or more runways that operate simultaneously. Though Mumbai has two runways, they criss-cross each other, so only one runway is used at a time. Technically this puts Mumbai in the single-runway airport category. So it’s in the league of busy single-runway secondary airports of cities like London (Gatwick, Stansted airports), Istanbul (Sabiha Gokcen airport) and major airports of smaller cities like San Diego (the US), Fukuoka (Japan) and Xiamen in China.

Mumbai handles over 900 airline flights per day. The record high air traffic movement (take-offs and landings) happen on days when the number of unscheduled flights —charter aircraft, private aircraft—go up, like it did on Friday. These flights are banned during the morning and evening peak hours, so when the load goes up during nonpeak hours, new records are set. “We hope to cross 1,000 aircraft movements per day soon,’’ the MIAL official said.

In civil aviation, the norm is to record time in UTC (Coordinated Universal Time, same as GMT) and Indian Standard Time is five-and -a-half hours ahead of UTC. The feat was achieved from 5.30 am on Friday to 5.30 am on Saturday. 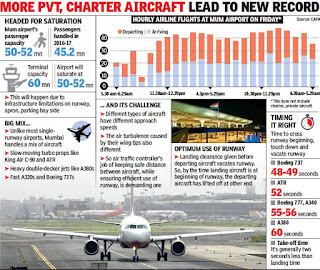