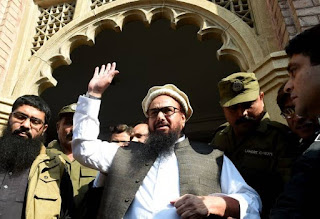 In a strong criticism of Pakistan’s support for cross-border terrorism, the government said that JuD chief and Mumbai attack mastermind Hafiz Saeed’s release appears to be an attempt to “mainstream” proscribed terrorists and shield non-state actors responsible for heinous acts.

A day after a judicial board in Pakistan decided to rescind orders to keep Hafiz Saeed under house arrest, the government said, “It also appears to be an attempt by the Pakistani system to mainstream proscribed terrorists. Pakistan has not changed its policy of shielding and supporting non-state actors and its true face is visible for all to see.”

The ease with which the judicial board in Pakistan rejected the Punjab government’s plea to keep Saeed under house arrest has raised suspicions that the LeT terror chief’s proximity to the Pakistan military worked in his favour. Seen as an “asset” by Pakistan agencies, Saeed immediately described his release as a setback to India.

The LeT chief has repeatedly spoken of his resolve to wage jihad against India and has addressed public meetings despite being designated a global terrorist by the UN and US. The Lashkar chief’s release is a further setback to India-Pakistan ties that are already in a limbo. Talks have been frozen over India’s insistence that they address terrorism and developments in Pakistan such as the exit of PM Nawaz Sharif.

Hafiz Saeed is a “terrorist leader” designated as such by the UN as well as the US, the Trump administration has said, following a Pakistan court’s order for his release from house arrest. Responding to a question, a State Department spokesperson was quick to express its displeasure over Saeed’s potential release.