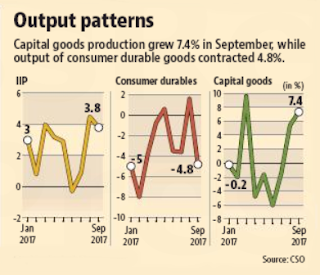 India’s factory output growth slowed to 3.8% in September from an upwardly revised 4.5% a month ago, but a sector-wise breakup shows stability returning to the industrial sector after the disruptions caused by demonetisation and the GST.

During the month, the manufacturing sector recorded 3.4% growth, the same as that of electricity, while mining output picked up significantly to grow at 7.9%. In the first half of the financial year (April-September), the index of industrial production has risen 3.8%, compared with an increase of 5% a year ago.

Capital goods production, which indicates investment demand in the economy, also grew for the second consecutive month in September, by 7.4%.

In terms of industries, 11 out of the 23 industry groups in the manufacturing sector registered growth in September. The industry group ‘Manufacture of pharmaceuticals, medicinal, chemical and botanical products,’ posted the highest growth of 26.4%. ‘Other manufacturing’ contracted 27.1%.
After gross domestic product growth decelerated by 5.7% in the quarter ended June, the slowest pace in three years, the Reserve Bank of India pared its economic growth projection based on gross value added to 6.7% for 2017-18 from 7.3% estimated earlier, blaming tepid growth in foodgrain production, adverse impact of GST implementation on industries and weak consumer confidence.
The RBI said economic recovery will begin as soon as the second quarter of the financial year.