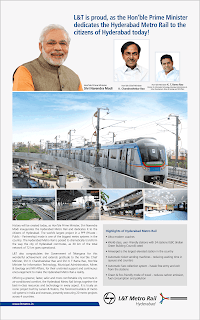 Prime Minister Narendra Modi will inaugurate the much-awaited Hyderabad Metro Rail on Tuesday afternoon. The 30 km-long first phase of the metro rail project between Miyapur and Nagole, having 24 stations, would be launched by the Prime Minister at 2:40 pm at Miyapur station. Its commercial operations would start the day after. During its inaugural run, Modi and Telangana chief minister K Chandrasekhar Rao will travel by the metro from Miyapur to Kukatpally, and back,