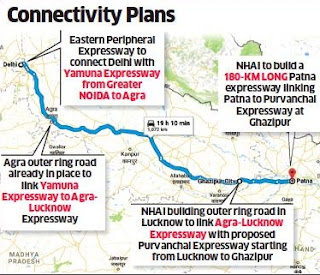 Delhi to Patna – 1,100 kilometres by road in 11 hours flat. This is the target being set by the BJP governments at the Centre and in Uttar Pradesh and Bihar, which are getting together to help slash travel time by at least a third between the three major political centres of Delhi, Lucknow and Patna by 2019, when the next general election is due.

The plan envisages a network of ring roads and expressways, and creating a new economic corridor on the lines of the Delhi-Mumbai industrial corridor. The road journey between Delhi and Patna takes an arduous 18 hours at present, and it was even longer before the Agra-Lucknow expressway built by the Uttar Pradesh government became operational earlier this year.

The BJP governments at the Centre and in UP and Bihar, where the party is part of a coalition with JD(U), are keen to address the issue of poor road connectivity in the two politically crucial states of UP and Bihar in the run-up to the next general election.

The Agra-Lucknow expressway was already seeing good traffic, with more than 32,000 cars and small vehicles taking the expressway on Diwali day when airfares were high. The authorities hope that travellers will similarly choose to drive down to Patna if have a hassle-free option.

Four new projects will be executed to implement this vision.

The road transport and highways ministry has offered to build and fund an expressway connecting Patna with the second project, a 350-km long Purvanchal Expressway that will connect Lucknow to Ghazipur. At present the road journey via a national highway from Lucknow to Patna itself takes about 11 hours.

The Purvanchal Expressway, which will be the longest in the country, along with the Patna Expressway to be built by the NHAI is expected to reduce the journey from Lucknow to Patna to about half.

The Patna expressway will cost almost Rs.2,000 crore. There’s already a four-lane highway planned between Patna and Buxar in Bihar that can be upgraded to an expressway and extended to Ghazipur in UP.

The third project will be an outer ring road in Lucknow, to be built by the NHAI, which will connect the 302-km Agra-Lucknow Expressway with the proposed Purvanchal Expressway without the commuters needing to enter the traffic congestion of Lucknow,