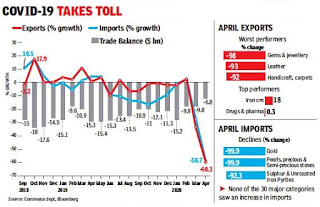 Coronavirus has battered Indian exports — which fell over 60% in April, the worst in almost 30 years — with the monthly value of outbound shipments at $10.4 billion being the lowest in 14 years. The lockdown, which halted almost all economic activity in the country, also resulted in a 59% slump in imports to $17.1 billion, the lowest monthly value since February 2009.

The pace of decline in exports was the worst since 1991 as data prior to that period was unavailable. The problem was so acute that 28 of the 30 major sectors saw a fall in exports, with drugs, pharma and iron ore being the sole exceptions. In case of imports, none of the 30 major sectors saw higher value of shipments, resulting in trade deficit narrowing to $6.8 billion in April, lowest in four years.

Although some economic activity has begun, exporters from key sectors such as garments, engineering goods and gems/jewellery said May is unlikely to be better than the previous month.

The sector was the worst performer, with exports falling almost 99%. It also showed in imports, with gold, precious and semi-precious stone shipments almost wiped out at $2 million each, while silver imports crashed 59% to $104 million.